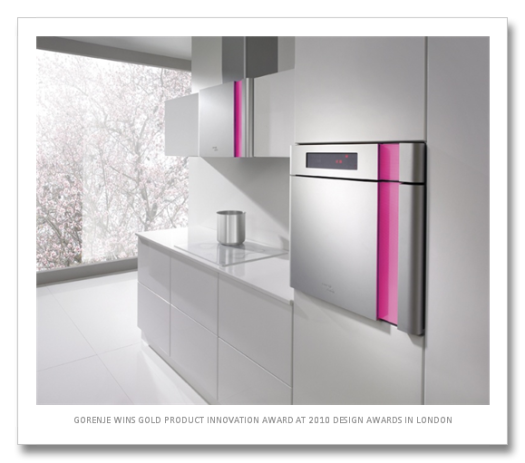 Held in London on 5th October 2010, the Design Awards celebrate those products that best represent excellence and real innovation in design. The independent panel of judges was impressed by Gorenje designed by Karim Rashid Collection which comprises of a range of ovens, hoods and hobs that feature Karim’s signature curves and bold colors. This appealing top-class collection of appliances brings the touch of light into your kitchen and provides a memorable experience for all senses. Gorenje is the largest Slovenian manufacturer of home appliances it is one of the eight largest manufacturers of home appliances in Europe. 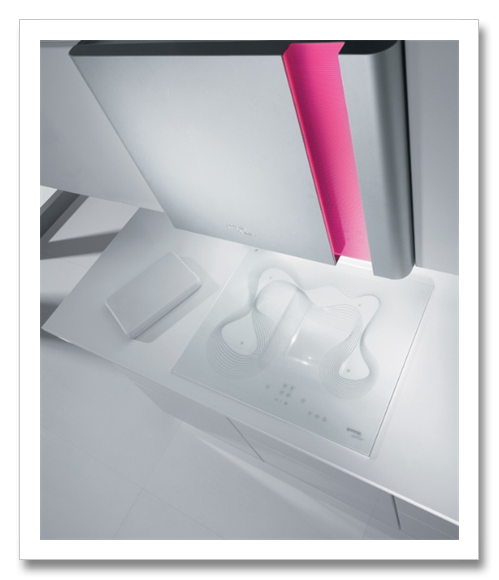 Teaming up with Gorenje was a perfect opportunity to pursue a desire Karim has had for ages: to introduce design into simple, everyday objects such as household appliances, to marry his imagination to advanced technology, and to create a top-class collection of appliances that will provide a memorable experience for all senses. The new innovative collection addresses the more demanding customers, the admirers of excellent design and timeless beauty.

“I have wanted to design appliances for ages. It was a great exercise in rethinking the banal. Too often we are relegated to tired archetypes. Design is about shaping contemporaneity. Design is critical to our environments, to our daily experiences, our products, our everything.” comments Karim Rashid and adds: “Everything needs to be designed, from our airplane interiors to our shampoo bottles to our money. We need to beautify this planet in every aspect, in every corner of the earth.”

Gorenje is equally thrilled about the collaboration with Karim. They are impressed by his charisma and the daring colors featured in his designs. To evoke the appearance of colorful elegance, they decided to employ LED technology, regarded as an innovative lighting solution of the future. “Hence, Gorenje is the first home appliance manufacturer to offer a solution that allows the users to change the color of their appliances, using the innovative MoodLite technology developed by Gorenje. The vertical LED light stripe allows several color versions, providing the option to adjust the appearance of the appliance to one’s current mood, or indeed one’s lifestyle", commented Mr. Aleksander Uranc, Gorenje marketing director.

Karim Rashid has designed products ranging from vacuum cleaners to furniture, children’s toys to luggage, television sets to perfume bottles and lighting fixtures. As an interior decorator, he has also designed several famous hotels and clubs; and now on Gorenje household appliances which, incidentally, he is using himself: “Over the past years Gorenje has proven to be a company that has a strong interest in contemporary design. I have been following and appreciating their successful
collections. When they contacted me to design the new Gorenje collection it took very little discussion to get the project started. I knew the company also because I do a lot of work in Eastern Europe and have an apartment in Belgrade with Gorenje appliances.”

You can check out their Catalogue

Karim Rashid is one of the most prolific designers of his generation. Over 3000 designs in production, over 300 awards and working in over 35 countries attest to Karim’s legend of design. His award winning designs include democratic objects such as the ubiquitous Garbo waste can and Oh Chair for Umbra, interiors such as the Morimoto restaurant, Philadelphia and Semiramis hotel, Athens and exhibitions for Deutsche Bank and Audi. Karim has collaborated with clients to create democratic design for Method and Dirt Devil, furniture for Artemide and Magis, brand identity for Citibank and Hyundai, high tech products for LaCie and Samsung, and luxury goods for Veuve Clicquot and Swarovski, to name a few. Karim’s work is featured in 20 permanent collections and he exhibits art in galleries world wide. Karim is a perennial winner of the Red Dot award, Chicago Athenaeum Good Design award, I.D. Magazine Annual Design Review, IDSA Industrial Design Excellence award. He holds honorary doctorates from the Ontario college of Art & Design and Corcoran College of Art & Design. Karim is a frequent guest lecturer at universities and conferences globally disseminating the importance of design in everyday life. Karim’s has been featured in magazine and books including Time, Financial Times, NY Times, Esquire, GQ and countless more. In 2009 Rizzoli released Karim’s latest monograph KarimSpace, featuring 36 of Karim’s interior architecture designs. Other books include Karim’s guide to living, ‘Design Your Self’ (Harper Collins, 2006), ‘Digipop’, a digital exploration of computer graphics (Taschen, 2005), compact portfolio published by Chronicle Books (2004), as well as two monographs titled ‘Evolution’ (Universe, 2004) and ‘I Want to Change the World’ (Rizzoli, 2001). In his spare time Karim’s pluralism flirts with DJing, art and fashion and is determined to creatively touch every aspect of our physical landscape.