This year Pantone chose a neutral yet fresh color which symbolizes rebirth. I have been watching closely the predictions for the trends in 2017 and for the first time most brands and developers agree on one thing, NATURE. I have seen another hue of green as a trend prediction for 2017, and I was not surprised that Pantone chose green as well.

Among other trends are Terracotta and cork, two natural materials as well. Let’s see the upcoming exhibitions and see if this is how the major brands will go.

On Pantone’s website, you can see the palettes they chose to show how Greenery can be used in different ways for different purposes and effects. Personally I would use this specific green with white or light grey to keep the ‘zestiness’  of the color. I would love to use it with blue as well.

In September 2014, Bisazza, a popular brand for luxury glass tile mosaics, launched a new cement tile collection. Going parallel with the new trends of reviving traditional floor patterns and colors, they crafted several collections and collaborated with famous designers to come up with a spectacular collection. During iSaloni, they added to the collection a line designed by India Mahdavi. The original collection included designs by non other than Paola Navone , Jaime Hayon, & Carlo Da Bianco.

Handmade in Tunisia, where cement tiles have been made for generations, Bisazza runs its own production. “The colors are more refined and we worked on the texture of the tiles to make them softer than the traditional version,” Rossella tells us. “They are handmade so every tile is different from the next, which I think is a plus. It’s not like ceramics where all the tiles are exactly the same, this one has more life and the texture is fascinating because it’s not shiny it’s more silky to the touch.”

END_OF_DOCUMENT_TOKEN_TO_BE_REPLACED

Do you ever feel your house needs a lift, yet you don’t know where to begin? Sometimes you don’t need to go through a great deal of effort to establish a trendier setting. Using wallpaper or wall-coverings is an effective way to give a totally new vibe to your space. With so many brands on the market, many of who are collaborating with well-known designers, you are definitely going to find what suits you the most. Below I will list tips on choosing your wallpaper.

END_OF_DOCUMENT_TOKEN_TO_BE_REPLACED

Departing from their well-known glass mosaics, luxury Italian design brand Bisazza has launched a new line of decorative ceramic wall tiles for their 2014 collection; a bold, brand new collection conceived and created by Marcel Wanders.
The tiles use Marcel’s signature hexagonal shape, and come in black or white diamond and flower forms that can be freely matched, transforming walls into tactile and asymmetrical artworks. Innovative and daring, Frozen Garden is ideal for all interiors.
To wit: “It only takes one crystal to grow a Frozen Garden. Plant one with loving care, and watch Frozen Garden unfold before your eyes. Organic and wild, glass and ceramic crystals transform walls into tactile and textured universes. Run wild in a garden of your own.”

END_OF_DOCUMENT_TOKEN_TO_BE_REPLACED

Windfall is known worldwide as the dynamic contemporary chandelier brand, which is re-defining the nature of crystal chandeliers. Dutch born Roel Haagmans and German Clarissa Dorn were already experienced chandelier designers for other companies when they set up Windfall together in Munich in 2004, to explore the contemporary potential of crystal chandeliers.
Their knowledge of technical issues is considered not only world-class, but also probably unmatched, and with Windfall they have developed an aesthetic, which has brought them to the attention of a deeply fashionable Design crowd.
"Windfall have entirely re-invented how crystal can be used, stripping back the old idea of an overburdened chandelier to it’s essentials, and bringing a fresh, airy, contemporary quality to classic materials".

Windfall also supplies chandeliers for some of the world’s top luxury brands such as Roberto Cavalli, Cartier, and Mont Blanc.

To View more of their projects and learn about their products click the link below. 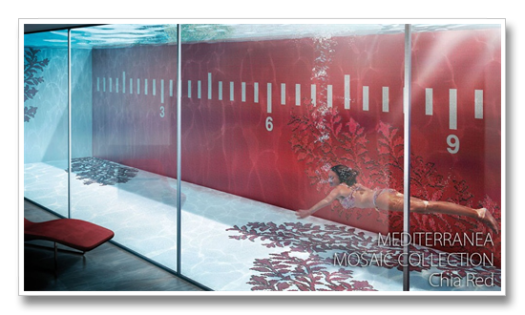 Designing in Kuwait, the need to design a swimming pool or update its finish is on a constant rise. For that I opted to share with you an artistic method of using mosaic tiles in your swimming pool. In a future post I will share the flexibility of including this type of finish within other parts of your home, be it you flooring, the bedroom wall, the living room, bathrooms etc. Below you will find photos of the lovely mosaics designed and made by Sicis in Italy.

Sicis started in 1987 as a company specialized in mosaics. Its aim, however, was to allow others to see mosaic not as a simple tiling product, but as a means of communication, and an expression of trends, fashions, and lifestyle.

END_OF_DOCUMENT_TOKEN_TO_BE_REPLACED

Dutch design legend, Marcel Wanders,  has collaborated with Senso on a new line of flooring Called “Impressions”. ‘It’s more about the texture than the color,’ says Wanders. ‘Some of them look almost edible, like chocolate.’. That said, the colors are bright and the effect of three-dimensionality rather impressive. Senso, the firm behind the flooring as suggested by Miracote, is a leader in advanced resins flooring.